Lots to choose from!!!

Hi everyone,
As you can see, we specialize in fine fleeced whites. We have several females available that would make outstanding foundation females. If you see something you like, give me a call, and let's discuss it.

Our bloodlines are heavily infused with the famous Hemiaccoyo lines developed by Timberland Alpacas, as well as those developed by Snowmass and Accoyo America.

Nestled in the Southern Indiana countryside, Clayfarm Alpacas began in December of 2004. Located in Northern Jackson County, our farm is situated on property originally purchased by Linda's father. Along with our two sons, Drew and Erik, we have a small herd of haucayas of predominately Peruvian descent. The bloodlines represented by our females include Victor, Hemingway, Valedar, Grand Master, and Accoyo Amadeus to name a few. We actually began investigating alpacas after a trip to the Indiana State Fair in 2001. As you know, they are more manageable than other types of livestock. Since we also raise beef cattle, the thought of working with an animal that weighs less than me had a LOT of appeal, not to mention the financial aspects as well. After doing our homework, we decided to purchase our first female in December of 2004. In January, we purchased two more females. Most of our females are solid white, with a couple of beige's as well. It is our belief that good whites will always have marketability as we transition into the fiber market, therefore we have opted to pursue a white program. To date, we have been successful in the breeding pen as well as the show ring. We are striving to produce animals that have good shear weights as well as fine fleeces that remain fine throughout their productive life.

In recent years we have made strategic herdsire purchases that have elevated our cria to the next level.

Snowmass D'Angelo should help take us to the next plateau. 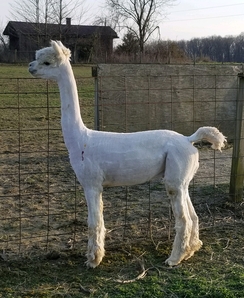 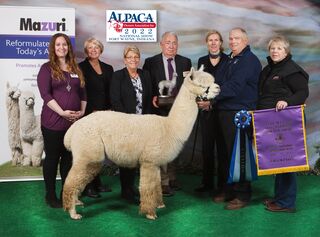 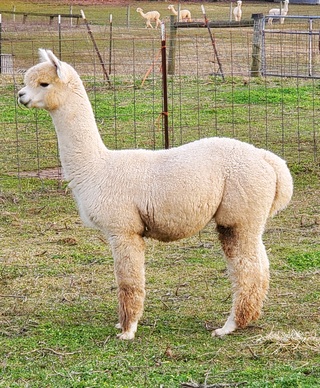